Charisma is a complex concept that many people use without knowing exactly what it means. From this stems the name of a certain leadership style, the charismatic leadership one. Today we are going to focus on it, see what it refers to and what characteristics define it, analyze a couple of examples and understand how to implement it.

According to the Merriam-Webster dictionary, charisma is:

a personal magic of leadership arousing special popular loyalty or enthusiasm for a public figure (such as a political leader); a special magnetic charm or appeal.

By extension, a charismatic leader is one that triggers the feelings mentioned above in an audience, whether it’s a private or public setting. However, if other types of leadership are something you can learn to implement, here, this feature is natural, so a person either has it or they don’t. Even so, some people claim they can train themselves to be like that, thus leading to a debate on the topic.

Many people compare charismatic with democratic leadership. Although they are similar in that they rely on the leader to guide the employees, the democratic type asks for more reason and cold decisions, instead of being based on emotions. At the same time, this type of leadership is often confused with transformational leadership. The latter also rallies people for a common purpose and encourages initiative and boldness, but it focuses more on transforming the current status quo. 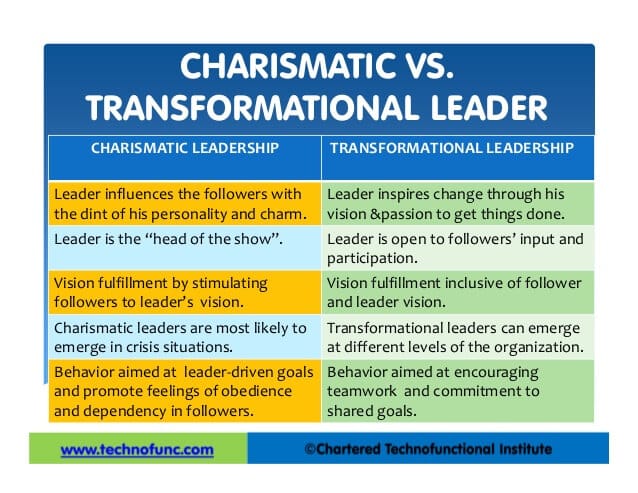 A comparison of charismatic vs. transformational leadership. Image source: Pinterest

One of the most famous examples when it comes to charismatic leadership is Martin Luther King, Jr. He was born in 1929 and became famous through his fight for civil rights. He always believed in peaceful protest and patiently convincing people instead of using violence.

Another great example of altruism and charisma is Mother Teresa. Born in 1910 in Macedonia, she was a Roman Catholic nun who dedicated her life to helping the poor. She set up a huge array of homes and centers for caring for the sick and inspired others to do the same.

Our last example comes from politics, namely Ronald Reagan. Being the President of the U.S., he often gave motivational speeches and attracted huge crowds of followers. To this day, he remains one of the most appreciated presidents ever.

Here you have an interesting TEDx Talk that draws a connection between charisma and the chances to win parliamentary elections:

How to Implement It

It’s important to create a vision that is suitable for your environment. Aiming too high might make you feel disappointed in the end. You need to constantly assess the vision and adjust it for your organization and employees.

Your vision might lose power if you don’t know how to communicate it properly. Work to become more concise and clear when telling other people about it. At the same time, it’s good to improve your communication skills in general as well. Be persuasive and understand other people’s motives.

A good charismatic leader should focus on building relationships with the people he works with that are based on trust. This will create the proper environment that would inspire the employees to go the extra mile in whatever they are doing.

One last step in implementing the charismatic leadership style is to use role-modeling and empowering people to reach your goals. Offer the employees the necessary ideas and tools. Follow your vision and keep in mind the motive arousal for your subordinates.

To sum up, charismatic leadership relies on a person’s ability to make other people like them. Whether we’re talking about volunteering, a private organization or the government, charisma can be essential for achieving one goal or another. Among the main traits of a good charismatic leader, we can find altruism, the ability to communicate efficiently, being a good listener, showing empathy and making people feel understood. Some say that this is an innate quality, while others claim you can acquire it if you try hard enough. Whatever might be the case, it’s important to consider both pros and cons before deciding to adopt this style of leadership.